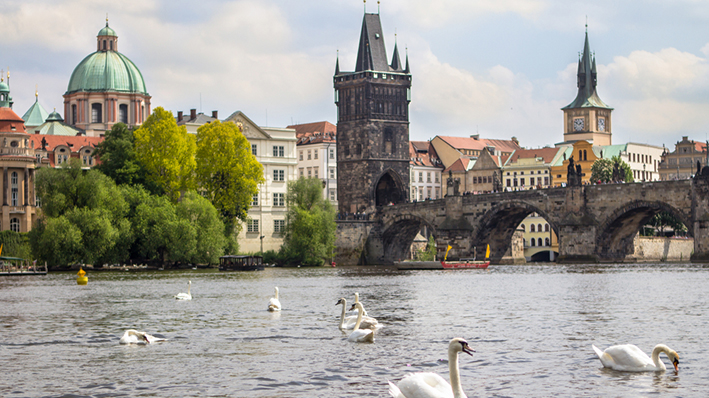 They met at Lanterna Magika in Prague. Here, even in the darkest days of communist rule, the most innovative multimedia productions have flourished.

Yvetta is Czech – a designer and actress at the Magic Lantern.  Phillip, an American doctoral candidate – writing his dissertation on the implementation of digital effects into a narrative for the theater.

Together, the two are prepping, a contemporary version of Kafka’s Das Schloss (“The Castle”) for a woman to star as the lead.

Prague has always been a very special place.  At the end of World War II, when the Allies bombed Dresden, they decided to save historic Prague.  The city survived and remained architecturally intact.

The Czechs value such survival. They have an unmitigated passion for it.  In 1968 came the Prague Spring. This energized, national movement injected a glorious breath of liberalism and hope into ordinary life. An extraordinary dynamic.

Czech leader Alexander Dubček naïvely believed the words of former Soviet leader Nikita Khrushchev who said: every communist nation should define their own form of communism.

Dubček enacted much welcomed reforms.  He proposed “socialism with a human face” and hoped Moscow would buy in.  But Leonid Brezhnev, Khrushchev’s hardline successor, held a different point of view.

The Spring was thus short lived.

Joined by all sorts of courageous friends, these young citizens strolled up to the tanks that then filled the central squares of the city.

Many locals, who could react quickly, did.  They escaped to the west as did the principals in Milan Kundera’s The Unbearable Lightness of Being.  But most remained.

Many intellectuals were locked out of their jobs and forced to perform menial labor.   A future foreign minister had to stoke coal to heat buildings in winter. Doctors washed multiple stories of glass windows, just to survive.

But this period of painful emptiness also provided the inspiration for the creation of many cultural works that reflected the struggle.

In a land, where freedom had again virtually vanished, the theater secretly stood as a beacon of light. A bastion of free expression. It became the heart and soul of the nation.

From within the Magic Lantern, leaders planned a  relentless series of mass demonstrations.  They coordinated the ensuing civil unrest that went on to reinstall the tenets of democracy without a shot being fired.

Yvetta’s grandparents miraculously survived the second World War.  Her mother, Eva, then grew up in Prague after the war, learning to survive life under the communists.  Her dream was to escape to the west.

Once, in the early ‘80s, Eva came close to succeeding.  Then in the ’90s, her dream changed.  She now loved Prague and wanted to stay.

Prague had become a place of change, opportunity and new beginnings. During that still volatile time, Eva accidentally met Will, an aspiring American writer visiting from West Berlin.

The train Will took arrives in Prague one crisp, wintry afternoon.

He rushes to his hotel, checks in, drops off his duffle and heads straight to a state-run travel agency to book a short excursion for the coming weekend.

Will is determined to visit Česky Krumlov.  Often referred to as the Florence of the East, this picturesque medieval village sits in the shadows of a towering hillside castle.  Literally a setting from Kafka.

The agency, however, is slower than slow.  Bureaucracy at its worst. Will remains stuck in a short queue.   To absolutely no avail.  When the clock strikes five, it is simply too late.   The business is closed for the day.  The last client in line ahead of him, however, catches his eye.

This young woman with an educated smile turns out to be Eva with her full head of puffy brown hair and blue eyes.  She is dressed in jeans, running shoes and a gray-tweed blazer.

Will fumbles his first two attempts to break the ice.  But he succeeds on his third when Eva cautiously agreed to join him for a coffee.

Conflicting thoughts simultaneously dance through Eva’s head. Quite a mixed signal. Hard to grasp all it implies.

She’ll have her big chance to practice English with an American.  But also must exercise strict caution as Czech citizens are strongly discouraged from socializing with westerners.

With neither any further ado nor the least discussion, the two walk separately out to the street.  Each shot a subtle glance over one shoulder and walk on.

A minute later and ten meters up the street, Eva and Will meet up again in time to round the corner together.  And to actually stay together for another ten years.

Eva later shared the story with Yvetta, who never did meet her father.  When Eva and Will broke up, Will went back to the States. He had no idea Eva was pregnant.  She never told him.  Had he known, then proposed to Eva and married her, she would have had the ticket to the west she once wanted so badly.

But Eva and Will had grown irreconcilably apart.

When Yvetta turns twenty she already works at the Magic Lantern.  And soon, like her mom before her, she too unexpectedly meets a young American.

When Phillip, a new intern at the theater, heads to one of the elegant old cafés to meet a friend, Yvette discreetly follows.  But the friend has instead texted his regrets. Phillip, clearly disappointed, tries hard to conceal it.

“An unexpected change of plans?” asks Yvetta astutely.  Having followed Phillip inside. “So… where in the States are you from?”

“Most recently.  Southern California,” observes Phillip, recognizing her as a colleague from the Lantern.

“Actually, I was there,” Yvetta informs him. “About two years ago.”

“On vacation, at school… or for work?”

“Something mysteriously summoned me,” explains Yvetta. “…To research an upcoming role. Also, to find out anything I could about my father.”

“Did you?” asks Phillip, surprised she had been in California of all places.

“Research, absolutely. Sun was great. Beaches a pure delight. As to my dad, not so sure. But maybe I stumbled on a good lead,” confides Yvetta as she recalls the young people on roller blades, zigzagging down the concrete walkway.

Some say such life in Los Angeles is life on another planet.  Feels quite true to a great degree.

Yvetta films the action on her mobile.  She keeps shooting, capturing different faces, different skaters from a multitude of angles.

After a little, however, Yvetta pulls off her sneakers, tosses the pair over shoulder and makes her way toward the water.

The young woman now looks just as her mother did when Will first met her – Eva in faded jeans, a turtleneck and matching beanie. Yvetta stops abruptly as the realization sinks in.

Spontaneously, Yvetta drops her sneakers, smiles to herself and plops straight down onto the sand.

From her new vantage point, Eva refocuses and starts to film a series of waves breaking just before they wash up on the shore.

“These waves are perfect cinema.  A couple of days ago, they were much better to surf,” observes a guy in a bathing suit, his surfboard under his arm.  A guy, Yvetta assumes, grew up in a California beach community.  He tosses her his long navy-blue towel.  “Mind if I join you?”

Yvetta catches the towel, sets it down but doesn’t reply.  Her eyes stay focused straight ahead.

“I take that to mean no problem,” he persists, planting his board vertically in the sand near her head.

“Not the way I read it,” responds Yvetta, her eyes glued to two o’clock, the site of a granular castle on top of a mound.  A letter “W“ etched to the lower right.

“Sorry, don’t mean to intrude.  Believe me… I understand your desire for some privacy.”

“Much appreciated.”  Her eyes continue to pay little attention to the surfer.  The sandcastle reminds her of Český Krumlov and captivates her attention.  Almost a perfect replica.

“Help me.  I’m trying to figure your accent.”  He continues, ignoring her words.  “Where’re you from?”

“Try Brooklyn,” suggests Yvetta, not the least bit serious.  Her focus locked on the castle that had fascinated her father. The man she had never known.  As her mind drifts, the sand sculpted “W” continues to steadily crumble.

“And me, I’m from ancient Greece,” jibes the surfer, his New York style of speech growing more obvious by the minute.

“Sure…”  Yvetta agrees, trying to hold back her laughter.  “But tell me who sculpts the incredible sandcastles.”

“Some strange, middle-age dude with long hair.  He’s here sometimes then disappears.  Never stays past dawn. Was traveling off in Central Europe for a stretch.”

“You know his name?” asks Yvetta, cracking the slightest smile.  “Maybe it begins with a ‘W‘?”

“Not sure.  Could be something like Wally.”  The surfer clears his throat.  “I’m Gerry.  But never met Wally.”

“Or Willy?”  She watches the puzzled look as he shakes his head.  “Okay, Gerry.  I’m Yvetta from Prague.  It’s just a bit east of Brooklyn.”

“Hey, Yvetta.  You got me there.”  Gerry extends his hand.  “Geography ain’t my thing.  Too multidimensional.”

“No problem.”  Yvetta extends hers, wondering if, by chance, the castle-designer just might be…

“Thanks,” replies Gerry, unaware of where she possibly could be at.

Yvetta blinks her eyes to bring herself back to the elegant old café in Prague, and the conversation she had going with Phillip.

“Must be a similar adjustment for you,” presumes Yvetta, picking up exactly where they left off, “must be tough leaving both sun and surf behind.”

“Yes,” agrees Phillip, attempting to sit up straighter to improve his posture.  “And, at the same time, no.”

“I share your dilemma,” admits Yvetta, her thoughts bordering both worlds.

“I’m tired of trying to navigate the cobblestones and these narrow windy streets,” frets Phillip. “On the plus side, I feel I’m reliving history at every turn.”

“But you are.”  Yvetta laughs, knowingly…  “It’s everywhere you look.”

Church bells remain silent.  Wenceslas Square is nearly empty.  No speeches being given.  A dearth of celebrations despite the political significance of the event.  The Czech communist party just quietly fading away.

For the first time since the end of World War II, the communists failed to secure the votes to qualify for any seats whatsoever in the national government.

To most, the communist rule feels like a hundred years ago.  To many, it was.

Feels more recent to Eva, Yvetta’s mom, who lets out a deep heartfelt sigh. Change finally has come. There’s no turning back as she rushes to meet Yvetta and Phillip. The two are holding her a seat in the theater, where the sound of surf and a closeup video of waves have already begun to pound the walls.

A multigenerational look at life surrounding a famous theater in Prague. 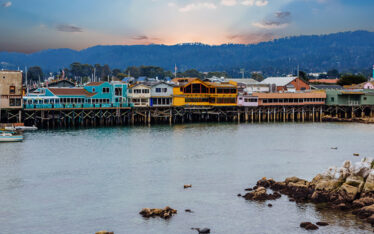 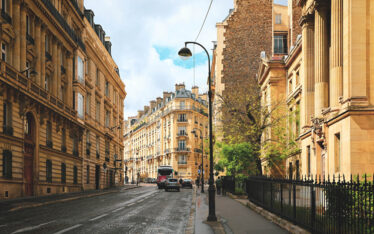 Writers Are People
A writer naturally befriends other writers.  Goes with the territory.  Personally, I always enjoy these relationships.  Share a little, learn a lot. I can’t recall feeling challenged by others who write.