To drink from the plastic bag, it meant to put its tip to my mouth, bring my two front teeth to bite. Then to face its test of gravity meant accountability: hugging the bag to your mouth, so as not to spare a drop of juice when it came to meet you.

In the marketplace, the merchants like to stare. They tend to call to you, greet you, so as to lure you into the depths of their platters: mounds of fresh tomatoes, ginger, celery, scallion, peanuts, peppers, or sometimes juice, packaged in tiny plastic bags the size of your palm. They mark you as foreigner, and rightly so, for you are a stranger: one who traveled thousands of miles to arrive at their home.

And as a teenager, I was a foreigner leaving New York. I stood in the middle of a marketplace in the Volta region of Ghana, unaware of what it meant to be here. I spoke with an obnoxious American accent, somewhat still bound to the exceptionalist and imperialist narrative of the United States, and also trying to develop my eye for photography. Moreover, the legacy of slavery –its violence, its horrors– had already driven the bulk of the distance between me and the people, who to me, felt so far away, yet strangely familiar. Black I was, and displaced.

It’s hard not to become absorbed in the rapid pace of life in a marketplace. There is no inhibition: within the open, communal space comes the unfettered exchange of words, sounds, gestures, and material goods. The marketplace becomes alive – its millions of moving parts transform into a living, bustling entity bigger than themselves.

I made my way through its narrow corridors, consuming the surrounding images, sounds, and smells at an ungodly rate. There was so much put in front of me, so much for my eyes and hands to consume, to feel and to taste for myself. I was also subject to its unpredictability- the moment someone brushed past, the honk of the vans transporting heaps of people, a merchant’s shout, sometimes a whisper in an alley nearby.

Not unlike New York, the rush and hustle/bustle, the fast-paced movement and implosion of sounds, meanings, colors, textures felt familiar to me. The marketplace ran parallel to those I’d find in Brooklyn, the Black street vendors who would sell mounds of castor oil, peanuts, sliced mango, papaya, packages of dried herbs and spices, on Flatbush Ave, Crown Heights, Utica, or somewhere in Queens.

In the linkages between Ghana and the U.S., I learned the ways in which Blackness is universal, though never monolithic. We represent Blackness in its endless multitudes, but all circle around a communal struggle made out of our millions of tiny ones.

New York itself continues to exist at the nexus of multiple constructions of Blackness: Black people from the Caribbean/the Américas/Abya Yala, Africa, Asia, and Europe come together to give this city one of its several lives, to find and build homes & community for ourselves, always in dialogue with each other. 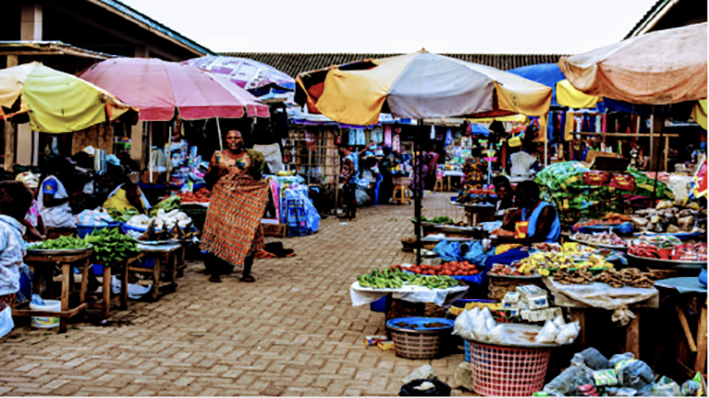 This lesson felt more pertinent now than ever, in a burning world, where we’re seeing the tension between violence and struggle, repression and resistance. With our ongoing uprisings, we have seen the radical, beautiful affirmation of Black lives all around the world, a moment requiring Black solidarity and community more than ever.

This is of course, not accidental. Rooted in the Black radical tradition is a history of Black unity, this heavy tradition defined by Professor Cedric Robinson as “the continuing development of a collective consciousness informed by the historical struggles for liberation and motivated by the shared sense of obligation to preserve the collective being, the ontological totality.”

As we align ourselves with protesters and organizers in Nigeria for the #EndSARS movement, Black American organizers and prison abolitionists whose rage and anger burns for Breonna Taylor and George Floyd, and those in the streets in the Caribbean/Latin America in open rebellion against corrupt, anti-Black government and the coloniality of power, we recognize the weight of our connections, the power in our Black rage and movement that has always transcended borders.

fighting for these same visions

On my last day in Ghana, Richard, our friend passionate about Ghanaian politics and culture, took two of us to Accra, Ghana, to visit former Ghanaian President and Prime Minister Kwame Nkrumah’s mausoleum. His memorial told us stories of a pan-African vision, the struggle for national independence from Britain, the movement toward decolonization. His legacy was clear, laid out before the three of us, reminding us of our own place in fighting for these same visions.

We are here, always have been. The history is there for us to follow. Worldwide, we have been building from it, imagining Black futures, and affirming Black lives – past, present, and future.

A comparative look at an open-air marketplace in Ghana, remembering Brooklyn.