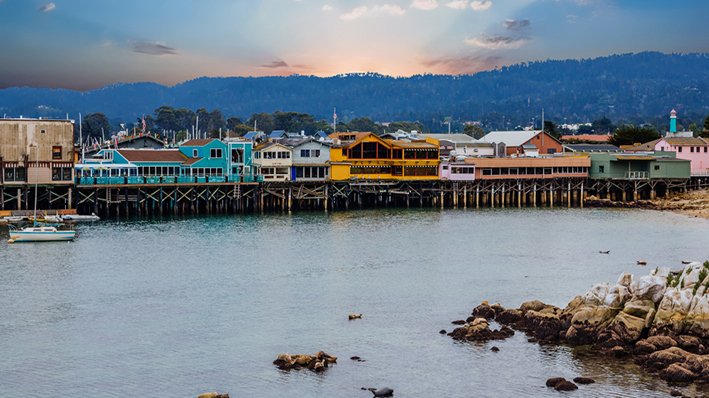 Visiting Carmel, I grow nostalgic. Both Tor House and its tower are imposing structures built of solid stone. Robinson Jeffers, a renowned poet and environmentalist, lived and wrote there last century. I soak up the inspiration.

On the way down from this local landmark, a pair of windswept cypresses form a natural gateway to the main beach. My journal in hand, I seek out a spot in the sand, where I can get serious and write.

My mind, however, remains rebellious, recalling Rainer Maria Rilke’s Letters to a Young Poet. Rilke describes the creative process as “…all gestation and bringing forth.”

Clarity needs to be nurtured. Can’t be forced.  Rather than challenge my lingering writer’s block, I make the ten-minute drive to Monterey and wander towards the waterfront.

Several years back I used to live on the peninsula. It was a good time for someone young and naïve. Lots of creativity afoot even if not always well directed. But there was a sense of camaraderie and community. Lots of mutual encouragement.

scent of the sea

Today, I head to Fisherman’s Wharf to feel a genuine bond with the sea. Kelp, shellfish, otters and sea lions all local residents.  At a takeout stand, I grab an order of fish and chips to restore some of my depleted energy.

Increasingly content, I gaze at a woman with a small dog. She moves as if she’s a twenty-year old tossing a ball to her pup.  But I realize she must be much, much older.

Doesn’t matter.  Before I know it, the two of them are gone.  Yet I hold onto a lingering sense.  Something about her is vaguely familiar.

I stop where, seconds earlier, the woman stood with her pup.  Now no sign of either. Instead, a faint flicker reflects up from the wooden boardwalk.  A strip of tribal tapestry grips three house keys wedged between two boards. It’s the tapestry, however, that captures my attention.

Scooping up the keys, I stare at the unique pattern.

“The design is Aztec.  Got the cloth in Mexico,” explains the woman, who reappeared out of nowhere with her pup. “Thanks, for finding them. I appreciate it. I was sure I lost them. Fell in the water or through an open crack in the boards. Just my luck.”

“Thanks to you.  You brought me luck.”  She playfully bumps my fist.

“Just seemed to be in the right place at the right time.”

“Hey!” the woman continues “You remind me of someone I used to know.”

“That so?”  She doesn’t look at all familiar to me.  “Probably just a coincidence.”

“From where?” I ask.  My curiosity piqued.

“Not from New York…  Definitely not from Mexico.”

“So, you keep moving around. Could even be from here.  You a local?”

“More a little loco,” she chuckles at making the association.  “That’s the word.  So, I’ve been told.”

“Don’t believe it.  You seem to be extremely together.”

“Not according to those assholes who punched me in the face.”

“For what?” I ask, shocked by her confession.

“Being too happy.  They told me to go back.”

“Anywhere I could imagine.”

“No,” she exclaims.  “In New York.  I was singing to myself, skipping down the street.  Already had my flight booked for the next day.”

“For the West Coast?”

“Been counting the hours.”

“And then you headed down to the Monterey peninsula?”

“First had to arrange to buy a semi-junker of a station wagon through a friend.”

“Now that I know a bit of your story, care to trust me with your name.  Believe me, I’m honest and trustworthy”

“Wow, I heard that before.  Trust is cheap.  Why don’t you tell me yours first.”

“No problem.  Friends call me Sloan.”

“What gives you that idea?”  I ask, checking to see if I still have my journal.

“My mom always said I was part psychic.”  She holds a finger to her lips.

“Not too often…  So, which is it?… Sloan something? Or something Sloan?”

“Sloan something,” I add, confessing.  “But my grandfather had it for a last name.”

“Have a picture of him?”

“Anything special? Clue me in.”

“I paint women.  Those with an inner spirituality.  Self-confident ones, close to nature… And especially women who share their space with pre-Columbian demons.”

“Wow, now that’s a precise niche…  Got anything I can look at?”

“Absolutely! Come to my studio, Sloan, and I’ll show you. Or, better yet, come to the gallery that reps me.”

“Coral…” I pause. It hits me. “Of course! I know you…  Remember that morning I went to the market on the Wharf then stopped by your place on the way back?  You stuck my fish in your fridge to keep it fresh.”

Her eyes open wide.  “And you put your car keys on top of it.”

“That’s right! You said that way I wouldn’t forget to take the fish with me when I leave.  But you weren’t Coral.  You were Claudia.  Claudia Calerno.  Right?”

“Still am!  Just use Coral for strangers.  And, yes, you’re Aaron. Not Sloan.  Aaron Bronowitz. Of course, I remember.  How have you been?”

My memory suddenly kicks in.  To when we were friends, both living in Carmel.  Claudia was and is a great artist. Completely self-taught.  A graduate of her life experience.  Paints unique visual fantasy.  A roadmap able to probe the corners of the mind.  A female Gustav Moreau. She paints women almost exclusively.  As opposed to Moreau’s men.

We had a group that used to meet for more of an early social hour than a meal thing.  We hung in a restaurant courtyard.  Taking a break from our various endeavors: writing, painting, composing, designing, bullshitting.

Back then I admired Rick Callahan for his professionalism. Still do.  He’d been a moderately successful screenwriter. Even Oscar nominated.  When he moved to Carmel, Rick changed IDs and switched to mysteries.

“Mysteries make you think differently,” Rick instructs, reflectively.  “Have to start at the end and work backwards.  Have to know where you’re going to be able to get there.”

“I didn’t either,” confesses Rick. “…But I needed to pay the rent.  When I originally got into screenwriting, it came easy to me and paid well.  But after a while I got burned out.  Bad.  I had it with the whole Hollywood scene.”

“Hey guys,” declares Sarah Milner, an amateur landscape photographer new to our group, “they say this fireplace out here violates code.   It’s 18 inches further to the left than on the city permit. The owners have to tear it out completely and rebuild. What a pisser!”

“Sarah, who cares?” announces Rick, slamming his fist onto the table. “That’s not my problem.  I’ve learned to wait for things.  This is no different.”

“Aaron, come on!” Claudia butts in.  “You said you’d help with that trunk. I need it in the studio.”

Claudia and I leave the others and walk a few blocks to the two-story house she rents.  Her studio is downstairs next to the garage.  The rest of the place sits one level up.

The trunk, a big old-fashioned type made from belted solid wood and has a traditional dome top.  The two of us struggle to get it out of the back of her station wagon without bunking into anything and into the garage, which Claudia conveniently uses as a studio annex.  Here, she sketches her fantasy images onto antiques before meticulously painting in the details.

“How about another coffee before you go?” she asks, grabbing the handle on her percolator.

“Thanks. But I can’t lose my thoughts.  I’ll take a rain check. Or I’ll buy you lunch tomorrow up on Cannery Row.”

“Sounds good, Aaron.  But why there?”

“I want to take another look at the outside of Ed Ricketts’ lab. I’m also researching how the sardines got fished right out of these waters. Monterey Bay went from being one of the richest beds in the world to the poorest. ”

“During the war, Nazi uBoats were freely roaming the Atlantic. They cut off all Allied shipping.  Blocked Portuguese and Norwegian freighters loaded with sardines destined for the U.S.  As a result, Monterey cranked up its own fishing to fill the gap.”

“A fucking lot!  Imagine processing soared from 8,000 tons a year to 250,000.  ‘Doc’ Ricketts, John Steinbeck’s marine biologist pal, was an early environmentalist, who tried to slow it.  But he couldn’t.  There was no way.  No one cared.  Greed set in.  It took over.  The fishermen just filled up their nets.  Didn’t even leave any breeders so the sardines could carry on.  Didn’t give them a chance to reproduce. No way, their numbers had a chance replenish.”

“So, without sardines, bye-bye canneries,” declares Claudia, digesting the story.  “Right?  What happened those factories? They also just disappear?”

“First gradually then steadily,” I explain.  “Many even got torched… They say to cash in on the insurance coverage.  One burned the very last night before its policy expired.  Someone was out there, as usual, to film the whole blaze.”

“I saw the movie at the Steinbeck,” says Claudia.  “That theater also isn’t around anymore.”

“The whole area went from being Cannery Row to skid row!  Then finally gentrification came.  It took hold and the developers cashed in.”

“Be nice if we some way could turn back the clock,” suggested Claudia as she leaned forward to look around. “Wouldn’t it?”

“Absolutely.  Let’s bring back the Bohemian look!” I announce my preference.  “But without the druggies.  Doesn’t need to be seedy to have more character and show more of its history.”

Claudia refills my coffee then plants a kiss on my cheek.

“Not to get personal, Aaron,” she clarifies before looking me in the eye.  “But, tell me, what brings you back to the peninsula?”

“Good question,” I respond.  “Believe it or not… Checking on the sardines.  I hear their numbers are coming back. Not like in the ‘30s and early ‘40s but steady and strong.”

“Been hearing the same.”

“If you want to hear the truth, Claudia… I’d also like to come up with an original story that captures the spirit of what we had going here.”

“Okay, Aaron.  But better make it good.  If you do, I’ll buy both a copy of the book and a ticket for the movie.  Here…” Claudia shoves a sketch into my hands, “what do you think?”

“A bit eerie!”  As if slimy creatures swimming within a woman’s womb weren’t enough, they had open sardine-can bodies, sprouting skulls and tail fins.  “Demons galore.”

“Exactly.  Here, it’s for you,” insists Claudia, who proceeds to sign the sketch while I hold it steady.

She writes… “Aaron, my friend – I know you have the key to open it all. Much Love, Coral”.

Revisiting and recollecting places on the Monterey Peninsula to reacquaint with prior friends in prior times.