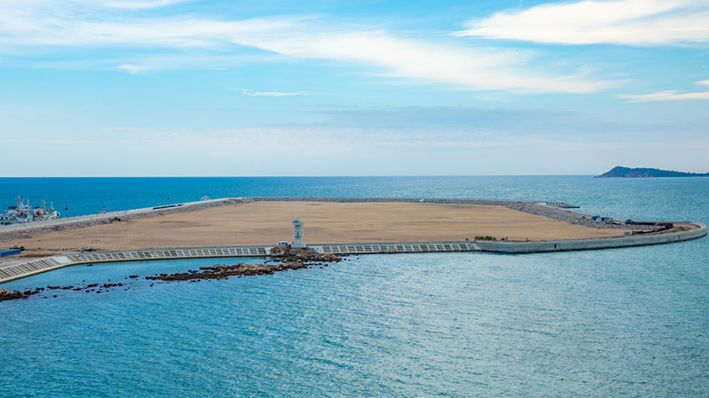 Today, the Chinese government has laid claim to Fiery Cross Island.  This manmade outpost serves as home to a complex military installation with high-end radar and missile defense systems. In addition, stationed there, is a small platoon of Chinese servicemen.

Just five years ago, the entire Fiery Cross Island did not even exist.

The Chinese have since ingeniously constructed a military base on top of a submerged coral reef. This rapid military buildup and contending legal ramifications of islands, such as Fiery Cross, make the South China Sea a hotly contested territory.

South China Sea has become one of the most economically sought-after regions in the world. It’s home to over 10% of the world’s fisheries. The territory is also estimated to have nearly 190 trillion cubic feet of natural gas with billions of barrels worth of oil in reserve.

These estimates, per the Asia Maritime Transparency Agency, are even said to be conservative as several other estimates almost double those figures.

The region represents a critical shipping lane.  This lane accounts for nearly a third of the world’s shipping traffic by both volume and value. For reference, the China Power Project estimates $5.3 trillion U.S. in trade per year.

How does Fiery Cross Island factor into disputes over oil, fisheries and trade lanes? According to international law, anything within twelve nautical miles of a nation’s coast is considered part of its territory.

Anything within two hundred nautical miles is considered to be in the “EEZ”, meaning a nation’s exclusive economic zone.

Therefore, with China’s expansion through artificially produced islands, free and fair passage in the South China Sea –as well as the invaluable resources within the two-hundred-mile area– are literally in dire straits.

As one could imagine, the rest of the world, especially non-Chinese allied regional nations as well as the entirety of the Western bloc, have been gravely concreted by China’s aggressive actions.

The concern has become so serious that the United States and her allies have begun regular military deployments and operations in the area.

In the summer of 2020, the US Navy dispatched a pair of Navy Carrier Strike Groups to the region.  These contain two cutting-edge, nuclear aircraft carriers: the USS Nimitz and the USS Ronald Reagan, simultaneously supported by nearly a dozen Arleigh-Burke-Class destroyers.

This show of force in the Indo-Pacific Ocean was carried out to remind China and other regional actors that these contested waters are to remain free and open to all nations.

The U.S. has also sent a series of fighter jets and other warplanes into the disputed territory to scout and warn the Chinese against further aggression.

The Chinese have largely remained undeterred in their quest for naval expansion. President Xi Jinping, refraining from direct engagement with US forces, however, has warned of retaliation and potential conflict.

In contrast to those from previous years, this threat is far from idle. The Chinese military has been increasing its naval, air and missile capabilities.

As the two world powers face off in the South China Sea, there is no shortage of tensions and heightened military preparedness. Should one side commit an error or engage another, a strong likelihood exists that the South China Sea could easily become a theatre of international armed conflict.

Thus, some nations would turn to the international community in hopes of mediation or global cooperation. The Chinese, however, despite numerous sanctions and attempted condemnations of their aggressive and illegal behavior, have vetoed any international organization intervening to stop their belligerent expansion.

With international mediation and law serving little purpose in stopping China, the responsibility therefore rests squarely with the world’s foremost superpower, the U.S. being the only nation capable of rivaling Chinese naval and air-force power in the region.

This growing turmoil in the Indo-Chinese region, in many ways, resembles a Cold War standoff between the U.S. and China.

Unlike the 20th-century Cold War fought on Europe’s front steps, this protracted pseudo-conflict happens deep in the Chinese sphere of influence and power, making the struggle against such encroachments significantly more difficult.

As Joe Biden enters the Oval Office this January, China is once more presenting a major challenge. The South China Sea issue had largely flown under the radar as President Trump’s attention span was preoccupied for four years with trade wars and campaigning. Now, however, President-elect Joe Biden has already served stiff warnings to America’s eastern adversary.

Under President Biden, the U.S. Navy will no doubt continue to defend and protect the South China Sea from Chinese encroachments. Should, however, Sino-American relations continue to sour, China’s expansion in the region could ignite a serious conflict, both diplomatic and conceivably military.

Examining a growing dilemma in the South China Sea.