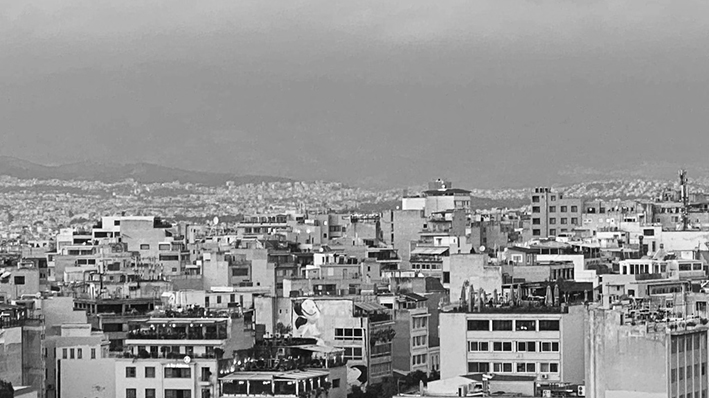 The Streffi hill starts at the bottom of Exarchia’s market street, and it goes a long way up, more than one would think when looking at it.

Daunting the neighborhood from above, the streetlights that surround it have a strange color, orange like in the night, their trunks hidden in a sea of trees – it’s almost as if they were the eyes of the unknown night creatures of Athenian fairytales.

But when you walk up the stairs, past the stone floor of the tavern, and climb up the steps to the tip of the hill, night creatures disappear and you find yourself submerged by an instant light – a moment of the divine, but no.

The city lights on kilometers’ end. Not an inch of duskiness left to spare, Athens takes it whole, the hills, the sky, even the clouds are visible to the human eye.

What looks from the outside like an obscure place, the Strefi hill is one of the most enlightened spots of Athens and if not for vertigo, an experience to have.

At this level, only the trees can protect you from the wind – but you don’t want to be protected, because this wind comes from the sea, and it is warm. Like an embrace. As if the wind were alive.

It’s difficult to remember the seasons when you’re in Athens. It doesn’t feel like winter, it doesn’t look like winter – only for Athenians, who undergo a drastic change of fashion, from t-shirts and sandals to karpas and scarfs.

I for one, have not touched my winter coat, and bathe in a pseudo-sense of superiority when walking down Skoufa street, nothing more than a pullover on my shoulders, the eyes of Athenians big and bright, surprised by my resistance to the cold. It is not my cold. It is theirs after all. I’ve taken them their sun. I won’t impose on their cold clouds too.

Like Strefi, there are a number of hills in Athens, the utmost points of the town. Seven hills, actually the same as Rome, so I like to think Ancient Cities made a point of telling each other how to appear, how to be remembered.

They all have the same implicit purpose – showing you the town in its entirety from above, thus far, turning us random wanderers into spectators of a monumental painting.

From far, Athens loses in-depth – the roaring motors of cars are unheard, the loosed doors of abandoned buildings don’t squeak in the silence, the smell of garbage uncared for doesn’t invade the air – no, the eye cannot see that anymore, and as the astronomer replaces a star in the universe, it replaces it Athens, the one it knows, in Athens as it is, big, immense, buildings infinite on the palm of every mountain.

These hills are the guardians of Athens’ grandiosity, the one we imagine when thinking about this capital of mythology, the port of poets and builders alike. They exist so your eyes understand they have seen nothing of it yet, and that one’s reality into Athens is nothing indeed, in the face of what an entire city is.

But it is an impossible task, to know a city and every one of its corners, any place where life met life to be intertwined for a time, forever. It is impossible to know every rhythm that makes the city wave into existence, impossible to taste every word written on every Athenian wall.

not of the senses

Impossible to smell all the perfumes people mask themselves into.

Impossible to taste all the lips that distance themselves from one another in between words.

And so, not only are our hills, in their guardianship so benevolent, but also cruel because they show something untouchable.

Condemned for life to eternal hunger and thirst, Tantalos is immersed to his neck in water and under a tree branch full of fruits, he can never reach one of them. Like us at the top of this hill, he is a victim to evocation, and cannot translate his desire into reality.

thirst of the city

Once on the top of one of these seven hills, you find the thirst to drink the city entirely, to touch it, embrace it, every inch of it. And once the idea runs in your head, you find yourself like Tantalos, the son of Zeus. However, unlike Tantalos, we, I assume you, have yet to be condemned. And so, unlike him, we’re free to come and go in Athens and catch the bitter taste of temptation when we please, at least, improvise ourselves into the masters of our desires.

As I sit on top of a rough-cut stone, on the Hills of Muses – the mélancholic title of Filopapou hill – I can think only that the city is a monument of life. I’m taken by a desire to jump into it, dive in and swim, a fish in a world with no gravity, in which Tantalos will be no muse. And I’m utterly certain I’m, fortunately, luckily, haphazardly, yet to be condemned.

A subjective look at a street with one of the oldest Gyros shops in Athens.