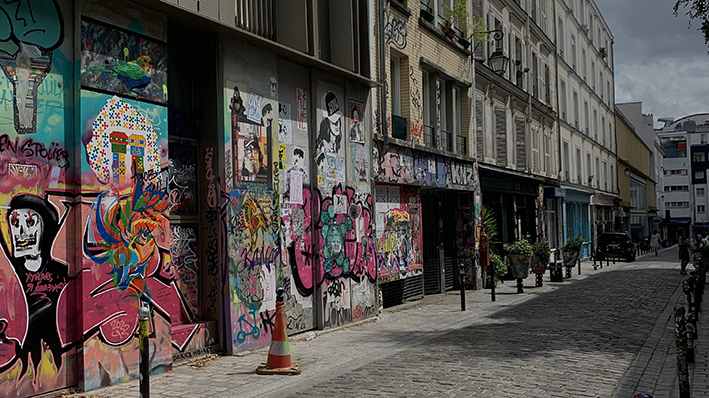 I‘ve grown up in immense cultural ambiguity. The root stemming from a difficulty to identify my own home city as “home”.

I always say that in contrast with any across the board homogenous town, Los Angeles holds no distinct tradition nor unique culture. Its “niche” is the very fact that most adults you cross who currently reside in LA are not from LA.

I can’t think of a single friend of mine who doesn’t have at least one migrant parent, let alone one who wasn’t born and raised in the “City of Angels”. 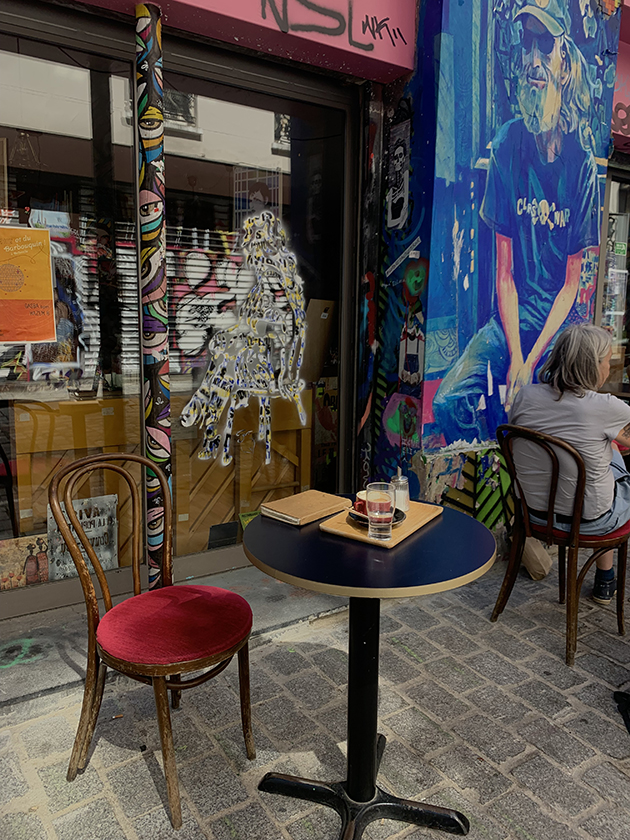 This sums up my bittersweet relationship with Paris. As much as I’ve spent my lifetime being enamored with its (melo)dramatic beauty, history, way of life and just general clichéd charm, despite it being the city I profoundly know and understand best, I never fail to feel out of place after a week’s long stay. I know that this city does not belong to me.

Only after spending the past few weeks in Belleville, the arrondissement sandwiching the 10th to the 20th, can I connect this sentiment of displacement with my Angelino upbringing — being used to an urban center filled with folk coming from all walks of life paradoxically attempting to claim the city as their own.

Paris is not mine nor will it ever be. Belleville has brought to my attention the counter-narrative that runs as a whole separate engine to Paris, one that beats the heart and soul of the city: the migrant community, the non-no-matter-how-hard-you-try-to-be-Parisians. 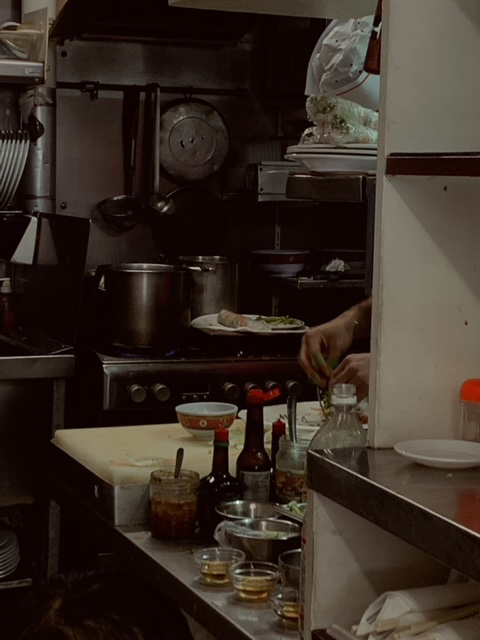 Step off Line 2, at Rue de Belleville, and you are instantly confronted with the living margins. The Arab men harassing you to purchase their black-market Marlborough reds; the old Asian women selling green onions out of plastic bags on the side of the street; the African men unapologetically striding in their distinctly patterned dashikis; the queer women embracing along the paint-slandered, alley walls. It is a haven of outsiders, of the bodies who do not belong no matter how hard the universalist narrative attempts to assert that their existence is pure American-islamo–gauchisme miserable myth.

While some might take the surface of colored skin as indication of a neighborhood’s socio-economic ranking — in other words, scaling its safety along the level of “ça craint”— you feel a breath of fresh air the second you enter Belleville. You instantly feel this space as a realm absent of the Parisian gaze (Parisian gaze being my theory that the general status quo Parisian social environment entails a certain hostility in the given setting, a set of social codes, expectations… a scripted performance of sorts to imperatively abide by.

It is one that defines itself via judgement, both in the active doing and passive receiving. Just the fact that I write this piece at a terrasse in Belleville, in company solely of a beer and my computer, at ease of any self-shaming tendency — this illustrates a trivial but point-made parenthesis. Here, the neurotic cultural illusions deeply inscribed into the everyday rapidly become alleviated (I say this writing at a bar entitled “Culture Rapide”). 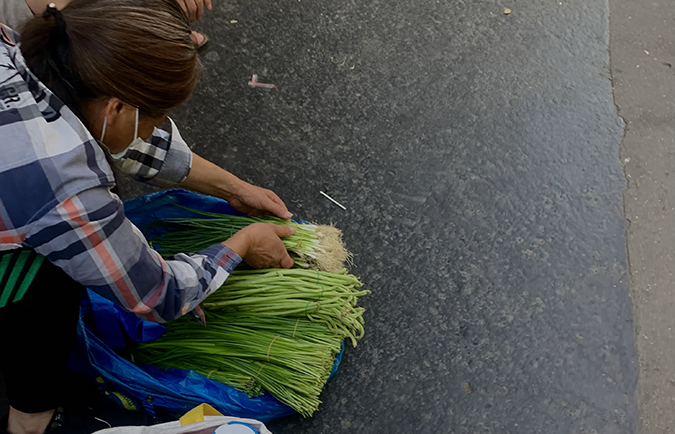 This quartier is not just defined by intentional affirmation. It reminds you of the multitude of stories that reside on the outskirts of the romanticized impressionist paintings: a woman asking at the local Ria to transfer 1200 euros to her family’s bank in Senegal; the Chinese prostitutes on Rue Civiale guarding the crossroads to Rue du Buisson St Louis from 10:00AM-dusk; the man from Laos who’s worked at Rouleau du Printemps for the last 5 years, having moved to Paris 5 years prior and hasn’t seen his family since due to a backlog of bureaucratic paperwork— the type of people to whom you ask how they like life in Paris and answer with a “comme si comme ça” shrug.

Hence why I characterize Belleville as colorful — where the negated shades of the Parisian palette congregate and cohabitate, and in turn, create. Create a space, community, and home for their fellow outsiders.

“Colorful” applies to its walks of life as much as to Belleville’s architectural charisma.

I recently re-watched Mur-Murs of Varda from 1981. The film documents the mural cultur of Los Angeles that embodies the city’s charm. The artist’s brush not only drives the creative pride of the miscellaneously structured town — it shapes the very face of it (far beyond the odd residential suburbs).

I realize now thanks to Varda-induced retrospection that my Angelino draw to Belleville births from the vivid street art as much as in the multiplicity of identities. 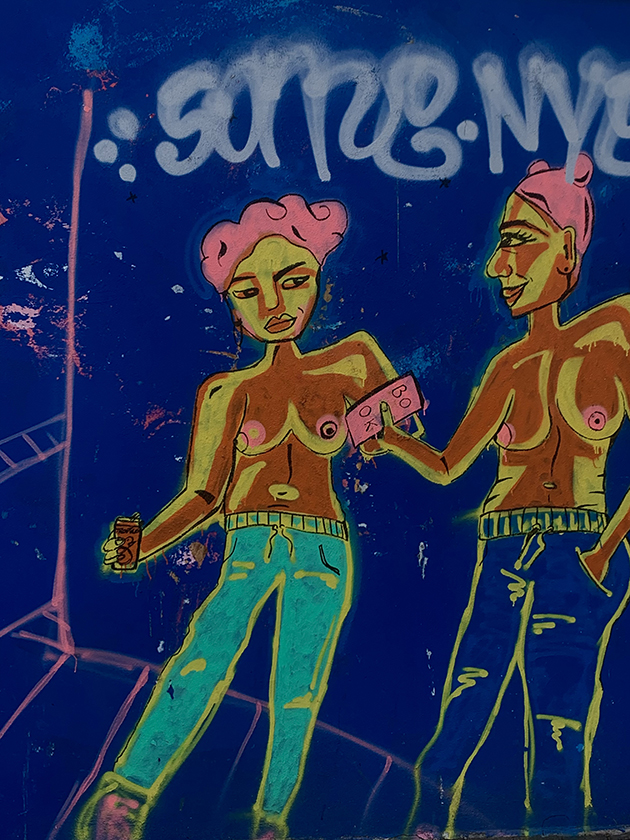 The abundant graffiti that would be diagnosed in the 16th arrondissement as vandalism is treated as landmarks to the Belleville blocks.

German electronic musician, Ellen Allain, wrote of her love for the city of Berlin as the following:

“After the 2nd war, everything was burnt here. Everything was gone, all the history. So, people start building up the “new Berlin”. When you come here, you have the feeling you have to help to build something here, I am part of it. When you go to Paris, I’m not feeling like I’m building something because there’s so much history you can see. It’s their own [history]. I think only about their own history. But, here… I start feeling so creative. [There’s] No past, only a future.”

I thought this reflection pinpointed the aesthetic root behind my feeling of displacement when strolling along Haussman-built shadows. The city’s design, as much as it is breathtaking and rich and transcends you in its telling of France’s designated victories, heroes, and prided artists… you walk in Paris as a cameo to a grander plot, one that constantly reminds you of not being your own.

Ink bleeds amidst the streets of Belleville in all shades alternate to the distinct variations of beige. From graffiti to tattoos — these aspects of the neighborhood, beyond the cultural/ ethnic “melting-pot”, run as an anti-thesis to the French let alone Parisian narrative of assimilation. Blank spaces are used as canvas to express designations of identities rather than spaces belonging to some ambiguous “collective”, one that’s supposedly too sacred for interaction (only admiration).

In Belleville, there’s sign of a telling of the future. Before your eyes at every corner lies a wanting to take agency over the plot in the making, rather than merely basking in the holy script.  Be it in the femicide denouncements or neon blue paint outlining a duo of dancing dark-skinned beauties: the painted walls surround you as affirmations that “we are here”. 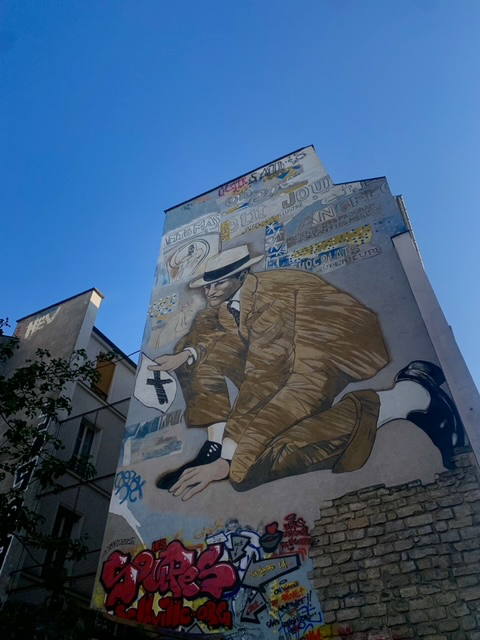 The temporality of any culture is fascinating. I increasingly come to understand that France’s relationship with time entails an engagement to preserving the past — past glory, dominance and cohesion. The question of its relationship with future comes as far murkier, notably when we see how the present politics struggle in contending with a changing “face” of France.

When I interviewed now French Minister of Education Pap Ndyiaye last summer at Palais de la Porte Dorée on the subject of the current French political/ cultural climate, he described the dominant sentiment among post prideful patriots as “fear”, explaining:

“It’s understandable to think of a society that is getting through major changes, getting through an economic crisis… which is also facing questions about what does it mean to be French in a changing world when France is not the superpower it once was, which doesn’t have an empire anymore…  So, all these questions have raised a number of soul-searching issues about identity, about threat from foreigners— the threat to national identity by immigration. All this is so central to political light nowadays in France, as we witness almost every day.”

Thinking about the future of France evidently falls as scary to most.

For amusement’s sake, I ask of you: what does the future of the great République look like? More so that the performative green city urban planning, the question of temporality and accordingly of “what is our future” I argue will find insight in the stories that increasingly coming to the surface, to life, that are anchoring their spot in the Paris space.

Belleville takes me in, its arms wide open, and quietly tells me that this city/ country/ culture is not stunted in the past. In the Haussman buildings, in the Napoleonic Code. It shows me the lives and active voices that are contributing to an alternate storyline of this nation, far being homogenous nor pre-prescribed nor linear.

It assures me that the collective tale of this nation is not told at the polls —with 14% of the French population being migrants with slim to no electoral representation—, nor at the level of status quo political debate, nor at the sites of select commemoration. It speaks in these colorful spaces, and in the individual stories that inhabit them. The stories that transcend a singular history. 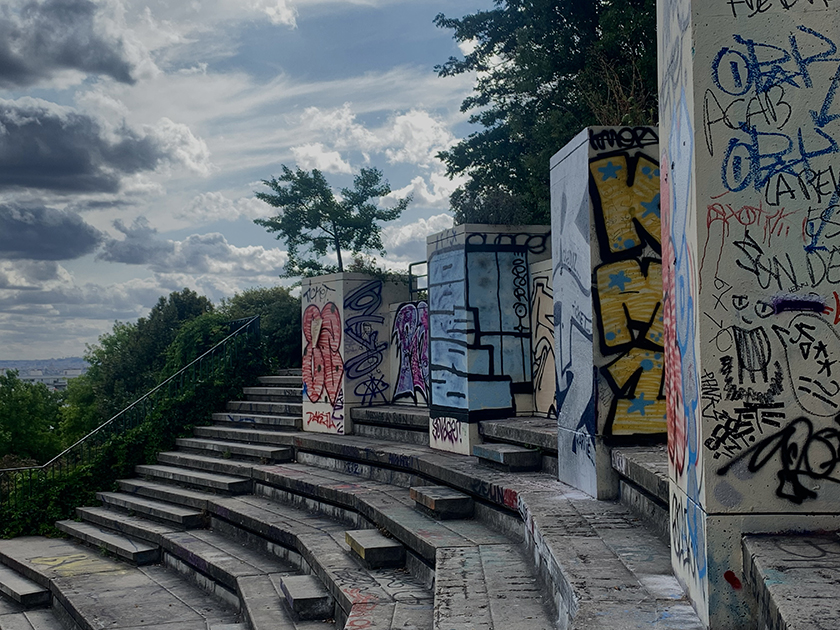 I’ll conclude in disclaiming that Belleville is by no means the banlieue. It is not some experience of housing that by any means is attempting to portray “the real hard life” of the city. It is increasingly bobo-land, which I fear will fall into a similar fate as the fully gentrified over-priced tourist hotspot Marais.

But the present tense and times of the neighborhood still allow a vantage point to see an alternate magic to this grand city, given its magnetic energy for people from all corners of the world coming to take a chance at a better life and contribute how they can to an evolving story.

It’s a pocket of Paris that shares with you a glimpse of real people and voices and wills to do something with their lives and the world they live in because their cultural narrative is not a given.

Belleville, for your color and wonder and musk and 2 Euro spring rolls, for all that you presently are, and I hope to continue to be for a damn long time:

A bilingual American acclimatizing to the charms of a diverse Parisian community. 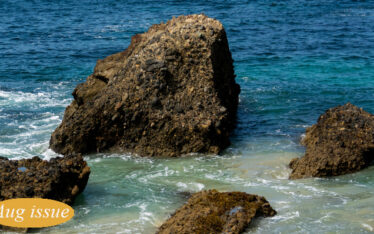 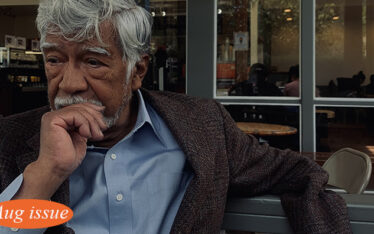 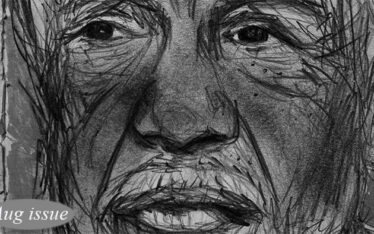 Ode to Angelo
Angelo, with his Freudian jaw, pensive/ wisely aged eyes, vibrantly silver hair, could strike you as a Steve McCurry muse – if the famed photographer should ever have ventured to...