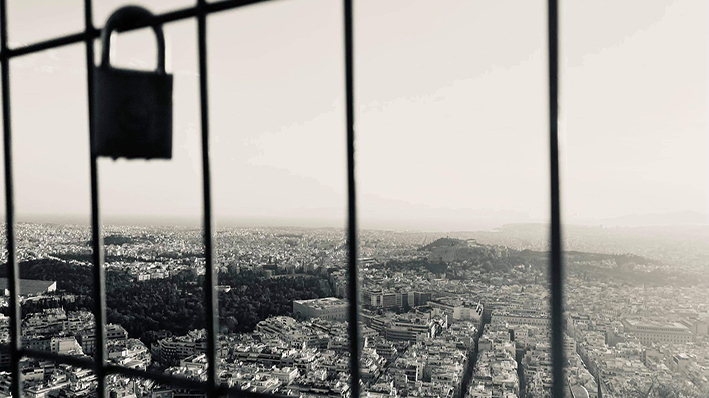 My father’s hometown – or how to learn to act Greek

There’s this story I’ve stumbled upon several times this summer, in at least three different books I’ve read. It’s about Jonah, an Israelite in the Old Testament. God summons him into becoming a prophet, and long story short, Jonah refuses and ends up being thrown in the sea while he’s on a ship and spends three days and three nights in a whale’s belly.

STUCK IN MY HEAD

I’m not very familiar with religious stories, but here in Athens, in the beginning of September, I can’t stop thinking about it. Maybe it’s because this capital city feels like the giant belly of this giant whale, and I feel like one of the many digested condiments passing through it.

It’s a bizarre feeling, to sense that you are only one amongst many, living in what looks like an endless labyrinth. I’m not saying I don’t like it.  I am glad to finally be living in a big city, but the anonymity I am living in is different than what I expected.

I decided to move here because this town is a whole part of me that I haven’t discovered yet. My dad was born fifty-eight years ago a few blocks away from the apartment I’m renting. The school my grandmother opened more than five decades ago is on the other side of the hill I climbed two days ago, to get a good look at Athens, and the acropolis, and the sea.

I’ve always felt Greek. I’ve always told people I was Greek. For so many years, it’s been my identity. But here, in this town, asking for coffee at the local coffee shop with my accent – wait, you’re not from here, are you? -, I see it in their eyes that I am not. At least not completely.

It doesn’t help either to be the only blond in an ocean of brown haired, brown eyed people. And to be the only one sweating when climbing up what seems like the thousand stairs that go up in my neighborhood – I’m sorry I haven’t lived here enough to get climate adapted. Anonymity is thus, for me, half lived.

It’s a whole enterprise, to be moving to a new town. An enterprise of seduction, surely. Walking in the streets of the historically intellectual and anarchist neighborhood of Exarchia, which is located on the southern part of Mount Lycabettus, the heavy warm air crushing your face, you understand there’s been life here, and that you weren’t there when it sparked.

The black and white graffiti of this writer you don’t know stares down at you, and you feel sorry that you don’t know him, and you stop in front of every explanatory sign, trying to get as much as possible in.

And you feel guilty sitting down at this alternative bar where people your age, no a bit older, are reading books and writing in their journals – you do the same, but it doesn’t feel genuine – are you stealing someone else’s place? Moving into a new town feels like being an imposter in a new romantic relationship, and the thing with towns is that the problem is not them, it’s you.

But seduction is a two-way street.

Athens by night reminds you of that – and walking in the alleys under the Acropolis to join my newfound friends for a beer, it doesn’t feel like the city is trying to swallow me, rather, it is spilling out everything it can, everything it has, trying to get my attention, from the music blasting out of rooftops and the drunk waiter smiling, telling me how much he would love to go to Paris, and the soft  hands of Greek girls welcoming me at their tables – you need, you need to go to that nightclub with us!

The next morning my headache is huge, but the cold caffé I’ve managed to order in my broken Greek works its way through my veins, and for a moment there, with my sunglasses hiding the bags under my eyes, I smile. I smile, and wonder if next time, I will manage to tell them I want a coffee without cow milk, which neighborhood I will get to lose myself in today, and which person will ask me – well, your accent is excellent, but you’re not from here are you?

I guess it took Jonah three days and three nights to understand his fate. After all, maybe one needs to be swallowed into the dark to understand where the light is coming from. Spoiler alert, it doesn’t always come from outside.

A look at revisiting and reuniting with ones Greek heritage.