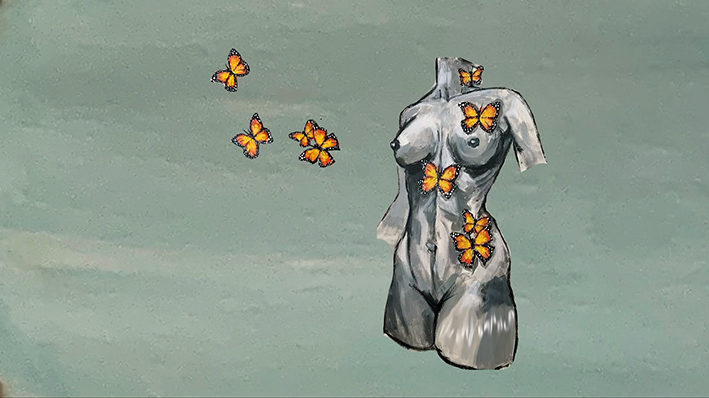 I haven’t thought about anorexia too much lately— at least my own dealing with it. Food has increasingly become … just food. Exercise is movement that spikes some dopamine.

My body is the way it is, no normative value added or subtracted depending on the calorie count of my previous meal.  This sense of neutrality doesn’t seem all too revolutionary. But I’m not thinking about all this like I used to.

I can’t say the state of “neutral” stays incessantly stable. But I know the times my heart races before a meal I can’t escape has become less frequent. As has the anxiety of not going for a run for x number of days.

The feeling of fullness is no longer intrinsically bad. My mind has basically deactivated a whole thought process that took up most of my mental storage space for the past 8 years of my life. Maybe this is recovered.

After a lot of thought, writing out, deleting, editing, I’ve come down to an understanding of recovery that is twofold, entailing both an internal and external dimension.

The external revolves around how I choose to engage in the world. Because in recovery you spend so much time analyzing your thoughts and thus having to spot anytime a toxic thought comes in— i.e. the Eating Disorder (ED) voice—, it not only becomes natural to police the diet culture voice in your head but consequently you become very aware of the words you’re articulating out loud.

Absent minded slips – commenting on others’ weight, commenting on food consumption pre, post or during meals among other things – become less frequent. That’s not to say they disappear entirely. You’re actively— and effortfully— unpacking the “absent-minded” in order to distinguish what you’ve been socialized to think from your authentic thoughts.

You unlearn and learn anew that you can choose to depart from the norm that nearly killed you. Through these cognitive efforts, your authentic voice gradually begins to overpower the other. And more so than gaining weight, or eating regularly, or not making yourself yack after a big meal, you realize that that power reversal – your voice vs. ED voice – is what recovery is about.

The external recovery typically precedes the internal – the usual paradox of the preacher. Even as I bash absent-minded diet culture, I still have my own moments of self-deprecation.

The ED voice still has her little decked out living space in my brain. But each day I make her feel less welcome, less at ease. She is shrinking with every decision I make that does not follow the logic of calorie count, of the self-bash talk, of the perpetual guilt.

More and more I have evenings where I stand naked in front of a full-sized mirror, no longer for critical self-inspection, but to have a moment of cherishing the full nourished feeling. The warmth has increasingly overpowered the cold. That’s the internal dimension.

One of the biggest takeaways from the turning point in recovery— “if I choose to go all the way”— is just how difficult the recovery process is for anyone suffering from an ED outside of a clinic.

It’s not like a drinking addiction where you can just ban alcohol from your immediate surrounding; food is everywhere. The exhaustion of recovery implied most investment in disillusionment. You begin realizing how many people ultimately have some messed up version one way or another of their relationship with food and body. And yet, that’s the world you wish to functionally live in.

You try to construct some image of where /who you dream to be that will make this whole emotional and physical drain worth it. The big shock sets in as you come look around and see that ideal image in the world that surrounds you is slim to none.

The ideal you were striving towards this whole time was to be “normal” … but it increasingly seems as though “normal” is just a sanitized version of the same shit you’ve been paying umpteenth psych sessions to finally get out of.

If “normal” is a simmered down suffering, why should I be the one to go the full way? Anorexia is the most interesting thing about me. What reasons do I have to lose it? All to prove a point that no one else respects.

I’ve been struggling to put the answer coherently into words. We’re all aware of how we each get influenced left and right by everybody and everything that surrounds us. Divorcing self from society when evaluating one’s thoughts… a whole lot of dizzy work.

For that reason, I’m thankful to have hit rock bottom.

In the messy midst of reaching recovered, the one realization I’ve had is how I view this angle of the world today —as well of this view of myself — is a belief I can affirm as fully my own.

As ridiculous as it sounds: I know that the feelings and thoughts I have when I look in the mirror, the fact I don’t search for a flaw to bash; that I don’t talk to my body in a constant tone of disappointment; the fact I don’t self-police because of a perpetual fear of gaining weight; the fact I know however my body shapes and changes throughout the day or week or year is just my body doing its thing, no good or bad value associated to x weight.

I no longer get anxious at the thought of coming home at the end of the semester to hear any family member comment on my fluctuating appearance … I know unfortunately that freer feeling is not normal for most women.

I know because that’s a belief I’ve spent the last year-and-a-half of recovery building on my own. This is despite all the messages I’ve grown up with and continue to be surrounded by that tell me the blatant opposite. I know this is my authentic self that I’ve fought to bring to the surface. And the feeling is worth every draining effort to go beyond the norm.

I initially started to jot down this reflection when I was at that fork in recovery: to formulate my “why” for recovering.

I’ve elaborated since then to write this all out for myself to have on hand whenever I could potentially have moments where I slip back into the destructive thoughts and/ or behaviors— a reminder of the reasons for why a life recovered from an eating disorder is worth everything.

I still need those reminders on paper because, as proud as I am for where I’ve arrived, I know where I’ve been. I know how powerful these voices have been throughout most of my life, and I recognize the fragility of stability.

I no longer chase the desire to endlessly shrink. As silly as it sounds, that’s been my most tangible proof to myself of reaching recovered.

Anyone who knows me knows my favorite thing to draw is the torso of a naked woman. My go-to doodle is always a woman with curves, skin that folds and creases. In my recovery sessions I discovered the symbolism to this naked lady that I continuously drew even when I was in the pits of my skeleton fantasy.

The naked woman was what I subconsciously strove to be – not for physical size (body sizes have no normative value) but because of what the body projected. The naked woman takes up space — unapologetically. The title of the recurring piece soon altered to “The Unapologetic Woman”.

The recurring image of this woman grounds me, as she always has. But now I know she symbolizes for me what this is all for.

where we go from here

I write this teary eyed because I never thought I’d be writing down this feeling and meaning every word. I guess that sentence in it itself is my “why” for recovering.

A perceptive reflection on having recovered from the societal repercussions of an eating disorder.