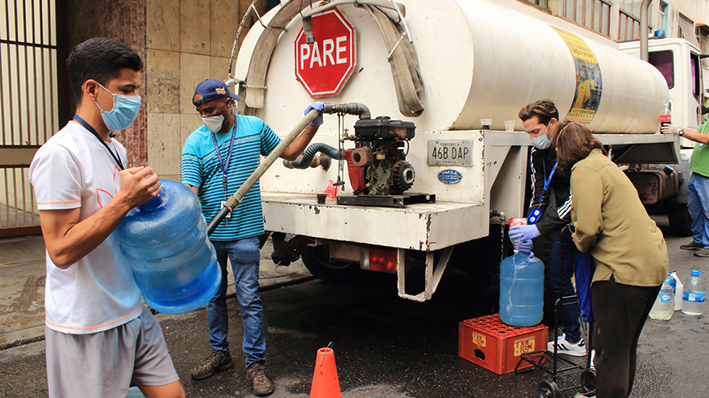 I’d like to preface this piece by stating that I am quite aware of the minefield I am about to enter.

Due to the global political landscape of the last twenty years, there is a need to place opinions within very polarized discourses and the opinion (based on facts) that I am about to present does not fit within a preset political position.

What I wish Americans understood about Venezuela…

Venezuela has been purposefully misunderstood to fit within frameworks. Now, I don’t pretend that this is a unique position. This a position that can be held regarding any country considered outside of traditional Western culture and history.

Therefore, if you are American, or European, I ask of you that for one split second you can consider “maybe our presence and existence is not a crucial element of the development of a country’s history”.

Following this, I will still establish a few things because debates around Venezuela tend to yield the same outcomes. First off (as my mother always used to preface): I am not funded by the CIA or the US government (trust me: I wouldn’t mind an extra income).

I am not a neo-imperialist that blindly follows the United-States foreign policy. I am more than aware of the gross presence of the United-States abroad (to put in mild terms and not say its mindless interventionism).

And lastly, no, I am not a dirty capitalist that is trying to tamper with the idea of socialism or communism. That last one can be addressed right now: there is no socialist dream to believe in in Venezuela. If you believe that you have not been learning history or studying the news, you have been learning propaganda.

What I wish people understood about Venezuela is that it is not a case you can use in your political rhetoric as a tool. We see in the entirety of the USA’s political landscape for the past 20 years. Republicans call it the exemplification of the failure of socialism and leftist-Democrats call it US interventionism in a country that elected a socialist leader.

If I had a dime every time that I heard someone comparing Chavez to Salvador Allende, I would not need the CIA funding. To be fair, this can be said about any country, the USA is guilty of doing this with many political situations. This is way too broad and too abstract for it to make a poignant statement. It is much more effective respond to the main falsehoods I have heard being perpetrated about Venezuela that are used to serve a political dogma.

Let us unpack that. “Democratically-elected” and “socialist” are the ones that matter here. Democratically elected, for the first few mandates, yes. No one in the “opposition” will deny this. What happens after 2012 however is where things start to get cloudy.

Considering that I am aiming to build a neutral case, I will grant the benefit of the doubt up until a certain point, namely when there is evidence to demonstrate that there is no doubt to be had. This evidence starts to be given to us at the end of 2015, when the National Assembly’s majority is won by the Opposition –it is important to note that for the last fifteen years, the Opposition is constituted by everyone that is not a Chavist, make of that what you will– but it is not then that it is exemplified.

The pinnacle of evidence of the authoritarian grasp that the government had is the 5th of July 2017, the day of the Independence, when the National Bolivarian Guard accompanied violent rioters inside the National Assembly. The images of the bloody hands on the walls of the chambers are ones that are hard to forget.

I’m going to abstain of going into depth on the hypocrisy of American so-called socialists being appalled at the Capitol Riots and calling for impeachment but consider that the 5th of July is the action of a “democratic” leader.

Anyway. There is strong evidence that the governments of the last six years (at least) has not been supported by the people, with polls showing the support for the Impeachment Petition signature collection that took place in the summer of 2017. Again, the hypocrisy in the USA’s leftists’ attitude is not worth going into.

I think what is worth noting about this hypocrisy, however, is that the evidence that proves them wrong is available, sourced by native Venezuelan academics and intellectuals.

There is an abundance of leftist literature in Venezuela that explicitly divorces itself from the governments. There is a particularly poignant quote, Teodoro Petkoff said that seems to elude most leftists in the USA; “I didn’t divorce myself from Stalin to marry Chavez.”

It is quite shocking there is a refusal to accept nuance or critical input in the portrayal of leaders that dub themselves socialists. It seems native voices don’t matter as much when they don’t fit into your narrative.

“The government in the last twenty years helped the poor and redistributed the oil wealth and the reason it failed is because of the USA’s sanctions.”

Phew. This one tends to come hand in hand with “They nationalized oil.”. Which again, phew.

This can be easily addressed. This also is not to give a shameless plug to my late mother (although it is deserved). But, in the last chapter of her book Pays Hors-Service, called “The Abandonment”, she depicts how the first victims of the crisis that Venezuela is undergoing today are the people from the poorest socio-economic backgrounds, as it always is the case.

Spoiler alert about political projects; it is not because you state something as an intention that it becomes true. It is not because the promise made twenty years ago stating the government’s first priority is the poor that it became the reality, because the necessary structural changes to improve their situation were not taken. Instead, stickers were placed over foundational flaws and when the earthquake hit, it came crumbling down.

The truth is the United-States’ sanctions were insignificant in the grand scheme of the economic downturn the country underwent.

There are countless books written about the mindless decisions that were taken, such as the arbitrary control of the value of currency with no strong economic structure to back it up, the mindless spending (I find it funny how Chavez’ request for “one little billion dollars” from the national budget is not taken into consideration), the lack of investment in infrastructure due to rampant corruption, amongst many other factors. It is again interesting to note that the evidence for this is provided by native academics and intellectuals, but there isn’t a great interest in giving those voices a chance.

Now, to tackle the oil argument. First off, any high school education in Venezuela will teach you it was nationalized in 1976, not 1999. It is frankly embarrassing to hear grown-up adults think they are making a brilliant point when it is a glaring demonstration of your desire to explain a situation you do not understand.

If you cared to understand the politics of oil, then you would know Venezuela was one of the first seated at the OPEC table. You would also know we have faced the drop of the price of the barrel in the past, and we economically survived. You would know that Venezuela’s oil industry was known to have skill and similar knowledge levels to the ones of private corporations such as Shell and BP.

You would know that what Chavez did in 2002 was cleanse the national oil company of any opposition to his politics, ridding it of some of its most valuable assets. You would know and have seen the decay of the oil industry in Venezuela, exemplified both by the increase in accidents relating to poor maintenance and the dramatic decrease in barrels produced per day.

You would also know that due to this poor maintenance, the ecological impact of the oil industry is significantly higher than it would be with proper care. This is to not say that it is an ecological disaster.

The oil industry in Venezuela is a complex field, with a long and rich history that cannot be reduced to it being an explanatory tool in your rationale behind your support for a leader.

Again, if you are seeing a country’s crisis as an opportunity to gather evidence for your political narrative, I don’t think you can claim to defend human rights. Going even further, when we examine the evidence of corruption tied to oil in Venezuela, I think that the argument, to call anyone in the government a “socialist”, crumbles from within.

I am going to finish by exemplifying this with a fact, given to us by ex-regime officials, that ties together the corruption factor as well as the holistic aspect of the Venezuelan economic failure. Ex-officials admitted that with the arbitrary currency controls the government has put in place, there are exchange rates that are only available to government officials, meaning only members of the government can change dollars to bolivars at a certain (very preferential) rate.

It is known that through this loophole, the government was able to transform a 40-million-dollar loan into 600 million dollars.

Now, I don’t mean to sound patronizing, but I am almost sure that that goes against what Marx preaches in the German Ideology regarding money and the global market and what Chavez claimed to be his ideology.

I can understand how this might appear at first glance as giving Republicans reason to say “this is what socialism does”. But again, if that is the conclusion you have drawn, please refer to my first few lines. What I have tried to show you is that Venezuela is not socialism, so it is as wrong for Republicans to claim that Venezuela is a failed socialist state than it is for Democrats to say that it is another example of the United States meddling into a socialist state’s affairs.

Understand that there is a possibility for political events to exist outside of the dichotomy that you insist on imposing for your own political benefit.

An insightful look at the misinterpretation by both left and right of current politics in Venezuela.