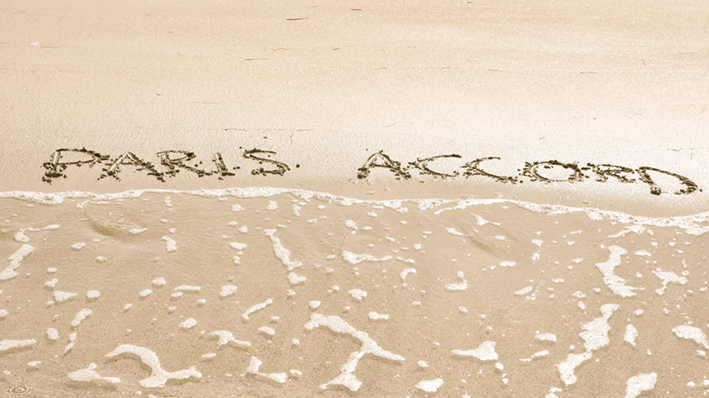 On November 4th, Donald Trump gave the United Nations official one-year notice that the U.S. plans to officially to withdraw from the Paris Climate Accord Agreement by November 4th, 2020.

Actor, Director, Environmentalist, Robert Redford responded on CNN.com: “I only hope now that the rest of the world understands that the American people, including many of our leaders at the state and local levels, are still engaged in the fight against climate change, and still committed to the principles laid out together in Paris just four years ago.”

“We can’t allow one unqualified authoritarian’s depraved indifference to the climate crisis define Americans’ commitments or the character of our nation,” argues Redford.  “The clock is ticking loudly, the rest of the world can hear it.  With enough outrage, enough action, and enough voices rising together, we might just have a chance to compel a reversal of this nonsense.

“I’m not sure if it will work, but I know without question that we will all suffer if we don’t try.”

Dozens of scientists published a statement in BioScience that was subsequently endorsed by 11,000 scientists.  The Guardian relays the stark warning: “The world’s people face ‘untold suffering due to climate crisis’ unless there are major transformations to global society.”

“Though American participation in the Paris Agreement will ultimately be determined by the outcome of the 2020 election,” the NY Times ironically points out, “supporters of the pact say they have to plan for a future without American cooperation.”

“Sea level rise is set to challenge human civilization for centuries to come,” states the Guardian, “even if internationally agreed climate goals are met and planet-warming emissions are then immediately eliminated, researchers have found.”

Higher sea levels are just part of the picture, another aspect of increasing climate crisis.  Wild and powerful  storm surges now push farther inland than they ever did, causing more destruction of property and lives – both animal and human.  More frequent flooding occurs.

“Disruptive and expensive, nuisance flooding,” according to the National Ocean Service, “is estimated to be from 300 percent to 900 percent more frequent within U.S. coastal communities than it was just 50 years ago.”

What is going to happen to coastlines throughout the world?  What will be the fate of all the incredible coastal cities everywhere?  Priceless oceanfront properties could vanish as civilization unwillingly and unwittingly steadily creeps inland.

Globally, eight of the world’s 10 largest cities are near a coast, according to the U.N. Atlas of the Oceans.  Almost 40% of the U.S. population lives in relatively high-density coastal areas.

Imagine major shipping routes abruptly forced to change.  Our harbors and international ports might become totally submerged. They could possibly suffer the same fate as Atlantis.

We mustn’t let our planet continue unchecked to warm.  We can’t.  The resulting effects could be horrific.  Bigger and more damaging hurricanes, tornadoes, fire and floods.  It is imperative for all of us to act and to act now.

The BBC reports Moody’s has downgraded its outlook on the nation’s projected ability to repay debt from “stable” to “negative”.

Moody’s, the credit rating agency, questions how soundly, post Brexit, the U.K. will be able to function as a nation.

This will mark the third time since 2013 that Moody’s has downgraded the nation’s credit.  It has voiced concerns that in the lead up to a national election, U.K. politicians have been making promises to increase spending but, per the BBC, have “no clear plan” to finance it.

“The vast spending plans announced this week,” per the BBC quoting Rathbone Investment Management: “make the U.K. look a higher risk prospect from an international debt investors point of view.”

A lower debt rating will make it that much harder and more expensive to borrow.  Reflecting the change, interest rates on any loan would be proportionately higher, .  The value of the pound on the world market would also be affected.

Outgoing European Council President Donald Tusk has long championed that the British remain in the EU.  He strongly believes Brexit could well usher in the “real end of the British empire”, adding: “Only as part of a united Europe can the U.K. play a global role.

Already Scotland is making preparations to request a vote on another referendum for their independence.  If this were to be achieved, it is most likely the Scots would then apply for admission to the EU as an independent nation.

The big question then would be who has the rights to revenues from Scottish North Sea Oil – Scotland or the U.K.