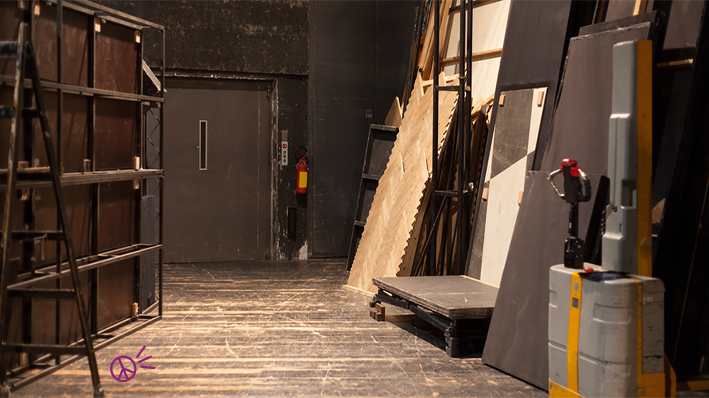 A tense conversation breaks the silence. Only two people can be heard on stage in a darkened theatre but no one is seen.

Each spontaneously rationalizes his position.  They’ve known each other forever.

The stage remains black.  Nothing visible.

Rick: “When times are tough, politics get rough.  Brings ’em alive.  Same with the theatre. Both need some fire.  Both need a little satire.”

Jerry: “And losing the basic premise.”

Rick: “So what?  Who, in their right mind, goes into politics today?  Tell me who’s that insecure! Who needs the aggravation? Or the negative exposure?”

Jerry: “Just stick with the lines!”

Rick: “Since when are you the director?”

Rick: “Sure and feelings change too.  So do my words and how I say them.  Reflects where I’m at this very moment… not the previous… not the next.  I try to be relevant.”

Jerry: “Relevant but not repetitious.”

Rick: “Repetition’s not my thing..”

Rick: “I avoid any detours.”

Rick: “I love when originality lights up the skies.  It’s invigorating.  Pure resiliency.”

Jerry: “I’m not… First, what’s your philosophy when it comes to love? Tell me you never made love the same way twice!”

Jerry: “Why should I believe you, Rick? ”

Rick: “How long have you known me?”

Jerry: “Don’t ask.  But surely if something worked great the first time, you must’ve tried it again.”

Rick: “Jerry, you’re digressing! How’d you get from politics to love?  I missed the connection.”

Jerry: “Use your imagination.  You’re good at that.  Every so often you might even find some politics in love.”

Rick: “Sure. But how often you seen any love in politics?”

A spotlight switches on to reveal a table at center stage.

Rick and Jerry seated there calmly facing each other.

Jerry shrugs: “And occasionally, they do.  So, trust me, repetition reinforces.”

Rick: “According to whom?”  He stares disbelieving into his empty cup.

Rick: “From a different time.”

Jerry: “But the same dilemma, Rick.  So, do you prefer to memorize or improvise?”

Rick: “But, Jerry, you see love as a calculation.”  With a flick of his wrist, Rick sends his empty cup skating straight across the table.

Jerry: “Not necessarily.  Hey, what’re you doing!”  Taken by surprise, he barely gets one hand up in time to stop the cup from flying off.

Jerry: “Thanks… Got lucky.”

Jerry: “Sure… Nothing personal, Rick, but…”

Jerry: “No.  You tell me! You and your partner ever synchronized emotions?”

Rick: “Jerry, we’ve known each other too long. And too well.”

Jerry: “Didn’t mean to pry.  I know there’s no way you’d ever reveal anything personal.”

Jerry: “Tell me! That from politics or theatre?”

world is a stage

Jerry: “Is that why you never post and your social media pages are all blank?”

Jerry: “So then, tell me how you feel about acting.”

Rick: “Depends on the play.”

Jerry: “Yesterday, you said…”  Perplexed, he scratches his head.  “Improv awakened your emotions.”

Jerry: “You know you blind-sided Rachel?”

Jerry: “She wasn’t expecting you to drop the script.  You two had been rehearsing for days exactly as it was written.”

Rick: “Rachel’s a pro.  She adapted.  And quickly.  You have to admit she didn’t miss a beat.”

Jerry: “You both reacted spontaneously.”

Rick: “The play came alive.  We gained the passion we needed.”

Rick: “Call it alternate reality as in political theatre.”

Jerry: “A form of self-denial?  For once, Rick, we’re in total agreement.”

Jerry extends his right arm.  Rick waits a full ten seconds to reciprocate and extend his.

Rick: “I’m for both comedy and tragedy.  It’s the mendacity of politics I can’t stand.”

Jerry: “In street talk, you mean the bullshit.”

Rick: “Sure.  Rachel and I are meeting up too.”

Jerry: “The same as last night?”

Jerry: “Try to get me the recipe.”

Lights switch off.  The stage goes black.  Again nothing visible.

A quick look at repetition versus improv in politics and theatre.