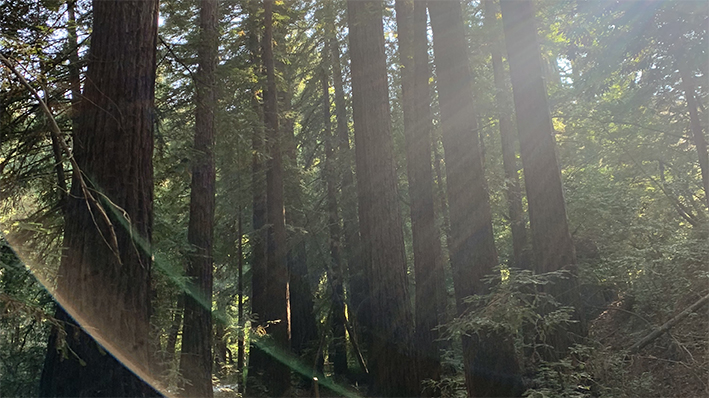 Reinvigorates my spirits.  Rejuvenates my soul.

Straggly stems of seaweed weave together. The colors of the water blur. A murky blend from a submerged maze.

A yellow and green mix tints the harbor.

It’s morning.  Not too early.  Not too late.  Caroline orders a coffee. I get a hot chocolate.  We head out.  Both drinks taste better by the water.

A family of otters frolic, splashing and shoving each other around. The four then, one-by-one,  roll over onto their backs to rest on virtual chaises.

Early each morning, these industrious creatures dive deep into the kelp to hunt shellfish. The mainstay of their diet.  By now, they’ve had their exercise and eaten their fill.

They’ve also earned some much-deserved time to kick back and relax undisturbed. But they keep their distance in both mind and reality. Each respects their companions.

While the otters sprawl out, a cluster of village locals, in sweatshirts and shorts, congregate ten yards or so back on the shore to sip their beverage of choice and catch up on the latest.  One can imagine they never miss a day.  Nor a speck of gossip.  As if that were possible.

No need for newspapers, local television or websites.  At their daily get together, they cover it all.  Subject by subject,  And with great enthusiasm.

Their attention is fixed on one another.  They see the otters every day and just accept them as part of the natural scenery.  That is unless something truly unusual should occur. 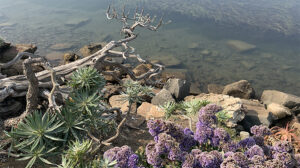 Across the chest of each otter a pair of front paws confidently clasp one another. They float detached and undisturbed.  Their facial expressions relax.  Reflect an indifference to the overcast sky.

Until early last century otters were hunted for their fur. They faced imminent extinction.  Now, they are locally a protected species. Their numbers have stabilized.  Between one and two thousand.  Content within their harbor habitat, the otters have become a success story in marine conservation.

The four in our sight remain here. Disengaged from the outside world. No reaction to the shrill bark of a sea lion. The sound shatters a calming silence.

Another web-footed mammal bellows its response. This one rises from a wooden walkway at the water’s edge. But draws little attention.

A third sea lion, however, soon joins in.  From the deck of a fishing boat anchored over the kelp field.  A passionate dialogue ensues.

This huge breast-shaped mound. Twenty-three-million-years young. Rises from the bay.

Topped by a giant stone plug, capping one of nine, long-extinct volcanoes.  Not all visible. Spread out in a distant row.

A blanket of rich black soil. Rich and fertile from the ancient lava. Fanned with a cool coastal breeze.  Perfect for a California Pinot Noir.

Standing there, we take in the fishing boat being scrubbed. Warm crumbs drop from our muffins. A pair of speedy sandpipers waste no time and scurry over to taste their share.

A row of three huge smokestacks rise from a nearby power plant.  Reminds me of an ocean liner.

Tied up in dry dock.

After an energizing diversion, it’s time to get back on the road.  Have to navigate the fog.

Follow those windy S-turns that demarcate Highway 1.  The Santa Lucia Mountains soar above our right.  On the left, a sheer cliff drops straight to the sea.

On our way again.  But, in no rush.  Actually, slowing it down.

NOT IN A RACE

Awed by the stunning scenery.  Invigorated by an amazing influx of energy.

Makes sense to pull over. Cars fly past in a hurry.  Time and again.

We’re not here to set any speed records.

Our next destination – Big Sur.  A blanket of fog lifts slightly the closer we get.  It transforms into a tunnel of low-flying cloud.

Our lateral vision increases.  That helps.  Makes Cabrillo Highway more visible as it winds and turns.  Two hands continuously clutch the wheel.  No letting go.  Especially not when we stare down the sheer hillside. Too far to plunge to the water below.

The Pacific appears amazingly calm.  True to its name.  Clearly an illusion.  History contrasts. Past shipwrecks far from uncommon.

86 years ago on February 12, 1935, the U.S.S. Macon, a gigantic fixed-body dirigible equipped with four bi-planes for scouting, became fatally trapped in a storm.

In failing to heed Cassandra’s call, its tail fin was shorn off by a crippling burst of wind. The Macon severely damaged as helium escaped its tanks, spreading flames in the process.

The pilot reacted quickly. Ordered the craft to fly high to burn up fuel. Then it belly flopped onto the water. Saving all but two on board.  To this day, the Macon’s sunken remains lay at rest somewhere near Point Sur.

Weather is now calm.  No wind.  Not a trace as we wait for a spot to open in a small, tightly packed parking lot just off the highway.

A short jaunt by foot as we hop out. Head up a wide, winding pathway and stairs toward the entrance.  Nepenthé, a local landmark and multigenerational, family-owned restaurant, offers fresh healthy food while taking in a spectacular view.

Location is everything. And a forty-minute wait for an outdoor table on the scenic wooden sundeck is nothing.

The coast reappears. As do a half-a-dozen stellar jays with their regal black crowns.  They stand still like hummingbirds surrounded by a jungle of native succulents.

We order vegan food.  Light and delicious.  Even a homemade tri-berry pie.

More fog steadily burns off.  The remaining strands rise even higher.  The view widens.  The jays joyously pollinate.  They loudly serenade.  We move on more energized and renewed.

The Henry Miller Museum and bookstore is closed today.  No big deal.  Just missing a nice touch.  Always admired his work.  Hoped to buy a fresh copy of Miller’s Big Sur and the Oranges of Hieronymus Bosch.  He paints, in watercolors and words. A glorious picture of the region.

The Old Coast Road, which preceded Highway 1 and partially covers a different route, was  just a dirt road when Miller lived in the area in the 1950s.  It actually still is.

Each midday or so, he and his neighbors would carry over a wooden dining table and chairs and set them down in the center of the primitive thoroughfare. They’d sit, grab some rays and play a few hands of cards.  How amazingly civilized.

A cloud of dust rising in the distance warned whenever an auto approached. The guys leisurely got up. Carried everything to the side of the road, waited, waved, then moved back once all was clear again. 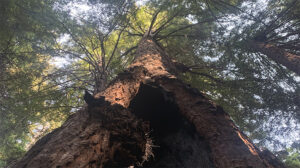 Hard to imagine.  Such a different time.  A different life.  Enviable in so many ways.

Mid-afternoon. The skies are finally clear. And not the usual traffic.  Only a light stream.  Heading north a mile or so to Pfeiffer State Park.

Partington Ridge brings back memories of a great old friend no longer with us.  Joe grew up in a rural environment. Made a success in the big city then returned to a totally rural existence once again.

As Joe described it, he got shot into Big Sur.  When his business plan got sticky, he took an unwanted bullet in his neck.  It severed a nerve, and he lost all use of one arm. Dropped him into a basic uncomplicated life.

Through exercise and physical therapy, he regained the use of the arm. But not its sense of feeling.  Yet, he built a cabin completely by himself. One side with sliding wood and glass walls opened-up onto a redwood deck.  Not bad for a guy with limited use of one limb.

No electricity.  No wires.  No wireless.  But the cabin was magical.  Joe cooked with a wood-burning stove.  Made the best corn bread ever.  With very limited control of the heat.

The three burners each reach a different temperature.  So, instead of turning a dial, you move your pan across on the cooktop from the hottest cast-iron plate to the middle heat to the lowest.  A juggling act until you got used to it.

Joe also had a butane refrigerator.  And a 1930’s propane-powered, clothes washer. Both, in A-1 condition.  The washer came with an original crank-up wringer on top.  To squeeze out the excess water.  It all worked perfectly.  His life was good.

Joe meticulously grew fresh vegetables and herbs in his garden. Had it fenced off from roaming scavenger deer.  He’d added a nursery for the redwood seedlings he raised, sold and shipped.

Joe always had his virtual welcome sign out.  He’d make a fresh pot of coffee. Share a little local folklore. Often about the history of the Essalen Indians and the surrounding forest of redwoods. Never looked back.

It then would be time for a hike. A truly special experience with Joe and his dogs. The man was completely at home in the woods. At one with nature. Can’t imagine him once living full-time behind a desk.

We explored the woods fanning out beyond Joe’s place.  Taking note of redwoods with open, burned-out trunks.  Some of the charred areas hundreds of years old.

Joe explained how the hunter/gatherer Essalen regularly burned the forest. Cleared out the overgrowth.  One time, however, a drought struck.  Life didn’t grow back for ten years or more. Nearly all essential vegetation destroyed.

He then pointed to the magic of nature.  The secondary trunks that sprout in a fairy ring from the original stump.  In no time, five or six trees.  Genetic clones of the original.

We pass endless redwoods on our hike through Pfeifer State Park.  They appear just as Joe had described.  An army of hollow stumps.  Burned or chopped.

Each surrounded by a ring of five or six younger sprouts reaching toward the sky.

Some appear as open-roof huts. These are big enough to enter and walk inside.  Which we eagerly visit. 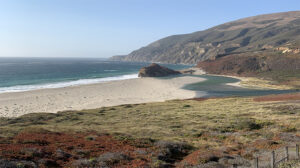 Despite the current drought, narrow tributaries branch off and flow freely from the Little Sur River.  Two converge, continuing down to the beach. To meet the tide and then the sea.

These skies, now clear, reveal the beginnings of an electric orange sunset.  As brilliant as the surreal ones Bosch painted in his 15th and 16th-century masterpieces.

A few timeless moments, we stand barefoot in the sand.  Captivated in awe, we watch as the last fiery rays sink, irretrievably into the dusk.

An introspective view of a drive up the central California coast on Highway 1.